To share your memory on the wall of Raymond Smith, sign in using one of the following options:

Print
Raymond Smith was born on June 24, 1955 in Chicago, Illinois. He was the third of four children born to Edward and Dorothy Smith. Raymond accepted Christ at an early age.

Raymond nicknamed “Hi-Fi” received his education in the Chic... Read More
Raymond Smith was born on June 24, 1955 in Chicago, Illinois. He was the third of four children born to Edward and Dorothy Smith. Raymond accepted Christ at an early age.

While attending Philander he pledged Omega Psi Phi fraternity. When he returned to Chicago, he associated with Nu Pi Tenth District. He loved his fraternity and always looked forward to initiating new pledgees attending the conclaves every 2 years.

It was during his educational pursuits at Philander Smith College where he met and married Faye Reed. They were married and to that union two children were born, Clarissa Christine and Brittany Faye. He also had another daughter Sherri.
Raymond worked in the banking industry for a while and then went into the mortgage banking business. He worked at various mortgage companies and eventually started his own mortgage company. He later retired.

On November 4, 1994 Raymond was joined in Holy Matrimony to Janise Harris. They enjoyed traveling to different destinations each year in addition to driving back and forth to Arkansas to visit college classmates and picking up the grandkids for the summer.

Raymond will be remembered for his gift of gab and his good sense of humor. He was always the life of the party.
Raymond was diagnosed with Chronic Lymphocytic Leukemia in 2012 and was later diagnosed in August 2019 with stage 4 pancreatic cancer. Raymond departed this life on Friday April 30, 2021 peaceably at home. He is now at peace and the family is comforted by the knowledge that he is no longer suffering or in pain and is with his Father in heaven.

To send flowers to the family or plant a tree in memory of Raymond Smith, please visit our Heartfelt Sympathies Store.

Receive notifications about information and event scheduling for Raymond

We encourage you to share your most beloved memories of Raymond here, so that the family and other loved ones can always see it. You can upload cherished photographs, or share your favorite stories, and can even comment on those shared by others.

Smith Family: May God be with you during this difficult time. Philander Smith College
ES

Posted May 06, 2021 at 08:32pm
Uncle Edward & Family, please know you are in our thoughts and constant prayers during this most difficult time. “May you have undeserved kindness and peace from God.....the Father of tender mercies... the God of all comfort.” 2Cor. 1:2-3 Love Always, Edwina Sampler-Wright and Family
Comment Share
Share via: 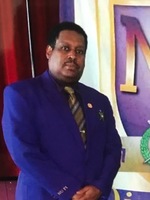