To share your memory on the wall of Lehman Williams, sign in using one of the following options:

For his safety and a better life, Bill’s grandmother sent him to Chicago to live with her daughter, Aunt Evelyn. Soon after, his grandmother, her daughter Aunt Bessie and granddaughter Willie Evelyn joined Bill and Aunt Evelyn in Chicago. Bill began his formal education at Willard and Forrestville Schools in Chicago’s Grand Boulevard Community. To help support his family, Bill worked odd jobs wherever he could. He washed dishes, unloaded railroad cars and ran errands for merchants. When he was older he pressed vinyl records for the DECCA label and worked for a jeweler on Chicago’s Jewelers Row.
While riding the train to the Great Lakes Naval Base he met Mamie Lee Moore and they married in 1945. Bill and Mamie were hired at the University of Chicago, moved from their tiny kitchenette apartment and purchased a home in Chicago’s Chatham Community. They took great pride in their home, loved to entertain and travel whenever possible. Bill’s mother-in-law, Mamie Ella Tracy, “Mother” as she was affectionately called, moved in after the passing of her husband. When Bill’s wife passed in 1985, he and “Mother” lived in the house until her health began to fail in 1990. Bill remained devoted to the well-being of his mother-in-law, visiting her every week at the nursing home, until her passing in 1995.

Bill confessed his love, faith and hope in Jesus Christ at a very early age. He served as a Deacon at Tabernacle Missionary Baptist Church under the pastoral leadership of Rev. Dr. Louis Rawls. After moving to their new home, Bill and Mamie joined Maryland Avenue Baptist Church under the pastoral leadership of Rev. D.D. Clay and Rev. H. Norwood. At Maryland Avenue Baptist Church (MABC), Bill served as a Deacon, Treasurer and sat on the Official Board of Directors. After many years at MABC, the Holy Spirit led Bill to join the Apostolic Church of God (ACOG) under the pastoral leadership of Rev. Dr. Arthur M. Brazier and Rev. Dr. Byron T. Brazier. In April 1998, Bill participated in the first class of the ACOG Men’s Ministry Discipleship. He became a Seasoned Saint of the church and remained a faithful member until his passing.

April 8, 1954, Bill was initiated and became a Master Mason of the Prince Hall Affiliation Free and Accepted Masons. He was a member of the Fidelity Lodge No. 103, F. & A.M. He was extremely proud of his membership and what it meant to be a Master Mason.

After 25 years of service, Bill retired from the University of Chicago in 1986 and was always on the go. Every Sunday he would be in church all day and Wednesday evenings attend Bible Study. He served on various ministries and had a great time at church events. He loved riding the train and would travel to Mississippi to visit his father, Lehman Sr., his brother, Joseph and other family members. Joseph’s daughters and their families brought Bill much joy as he loved being their Uncle L.D. and they loved him in return. Bill enjoyed working out at the South Side YMCA with his buddies and taking bus trips across the country. He always found time to be with friends, hang out with his nephew, Marcus and take road trips with his daughter, Cindy with whom he had a special bond. It was Bill’s mission that everyone should enjoy life. If you weren’t having a good time or laughing until you cried then you weren’t talking with Bill. Even at your lowest point, he would find a way to lift you up. If you needed help, he would lend a helping hand. He donated to every charity that asked so that he could make a difference in some else’s life.

After shattering his hip on February 3, 2021, he continued to be as strong as he could, sparking happiness in others and being a little feisty whenever allowed. On March 26, 2021, with his daughter, Cindy holding his hand, Bill left this earthly world. He had a wonderful life and fought a good fight for 95 years. His Father told him “Well done, thou good and faithful servant” and called Bill home to be with Him.

To send flowers to the family or plant a tree in memory of Lehman D Williams, please visit our Heartfelt Sympathies Store.

Receive notifications about information and event scheduling for Lehman

We encourage you to share your most beloved memories of Lehman here, so that the family and other loved ones can always see it. You can upload cherished photographs, or share your favorite stories, and can even comment on those shared by others.

The West, Cuffie & White sent flowers to the family of Lehman D Williams.
Show you care by sending flowers

Posted Apr 06, 2021 at 12:34pm
I remember Uncle Bill would always joke around with me when I was a kid, telling me he played left field for the Cubs, the one and only Billy Williams. Then one day when we were over at his house and the Cubs game was on I asked him how he could be in left field on the Northside when he’s sitting next to me on the Southside? And then came that loud joyous laugh like he had the sun in his belly and, “Aw man, you got me, you got me baby!’ Uncle Bill was such a big part of my me and my brothers’ lives, whether it was pizza and Crazy Eights on a Friday night, drinking beers in his basement bar, seeing him on campus when we were kids or seeing him at our weddings. We’re gonna miss Uncle Bill.
Comment Share
Share via:
DP

Posted Apr 06, 2021 at 12:27pm
Dearest CJ,
Your love for your Dad and his love for you was a love in PLAIN VIEW for all to see. Bitter/Sweet is such a love. To have had it for a moment is better to have never had it at all. You both were blessed to have it for so many years. GOD IS SO GOOD! Prayers to you and yours in this time of loss. Know that I, Dr. Carmen L. C. Palmer, and the Palmer Family send you our loving support. The Maker wanted his son Home with Him. And so it is. And so it is. Amen & Amen. Love you
Comment Share
Share via:
JS

Posted Apr 06, 2021 at 11:42am
So sorry for your loss! Our hearts are filled with sorrow as our family will cherish the memories of our Uncle Bill!

Posted Apr 06, 2021 at 11:00am
I am so very sorry for the loss of Uncle Bill or Peaches as I called him. He was very special to our family. I will miss his wonderful spirit and smiling face. Prayers for the family 🙏🏽 Cathy Smith
Comment Share
Share via:

The Board of Directors of the Chicago Teachers College/ Chicago State University Alumni Association, Inc., come to support, comfort, and extend our deepest condolences to our own, Cynthia (CJ) Powell- Jenkins in the Homegoing of her father Mr. Lehman Williams.

We will continue to pray for you and be with you. We make ourselves available to you. Whatever you need us to do, we are happy to assist you. We love you and may God continue to bless and keep you.

My father, James Bernard Sutton, cherished his friendship with “Uncle Bill”, and that meant a lot to us. Bill is such a part of the fabric that made up our sutton family history there on Chicago’s south side. My family and I will miss Uncle Bill dearly. We will miss that infectious laugh, sense of humor, and love and warmth he showed all of us. Please accept my condolences. Sincerely, Jimmy Sutton 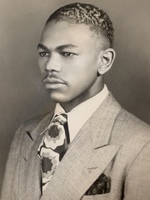