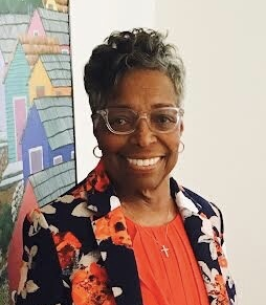 Gloria Lewis Johnson was born on November 10, 1941 to Ramsey Sr. and Pauline Lewis. At the time she was born, her family resided on the north side of Chicago, Illinois. Gloria peacefully made her transition on December 19, 2021 in the comfort of her home, where she had resided for over 45 years on the south side of the city. Forever a teacher, Gloria touched the lives of not only her students but others she met outside the classroom, as she always had a friendly word of advice or encouragement to offer.

Gloria attended Jenner Elementary School and began her freshman year at Wells High School. However, after her family moved to the west side of the city, Gloria transferred to John Marshall High School. She graduated from Marshall in January 1958, and in January 1962, she graduated from DePaul University with a Bachelor of Music degree. Upon graduating from DePaul, Gloria began teaching third grade at Mason Elementary School on the west side of Chicago. In June 1962, Gloria was invited to teach at Marshall. Thus began a long, rewarding, and exciting career of teaching at the high school level.

From September 1962 until June 1973, Gloria participated in many activities at Marshall in and out of the classroom. It would be difficult to find a former member of the Advanced Mixed Chorus who did not enjoy singing selections by Bach and Handel, as well as To Be Young, Gifted and Black and other popular tunes with “Miss Lew” directing. She never forgot the time when her students left class doing a popular dance, the Twine, while singing the Hallelujah Chorus. Under her direction, the Advanced Mixed Chorus served the school and community providing a wide variety of music for all occasions from Spring and Fall Concerts to Midwest Community Council Teas. In between chorus and play rehearsals, student council meetings, and basketball games, Gloria married William A. Johnson in March of 1969. It was overdue, as she would put it, as their dates frequently included chauffeuring and chaperoning other people’s children, such as Mary Ruth, Linda Bright, and her niece, Paula Ann. Out of their union was born two children, James Alfonso and Kimberly Patrice.

In 1973, Gloria joined the faculty of Curie High School where after a year of teaching girls chorus, she left the classroom to work in two critical roles: Dean of Women and student scheduling-grading reporting. Gloria later became an assistant principal at Curie as well as King High School. During her career as an educator, Gloria earned a Master of Music degree from DePaul University and a Master’s Degree in Educational Administration from Chicago State University. Just as she was thinking about retirement, Gloria received a request to bring her skills to the central office of the Chicago Public School (CPS) system. As such, she ended her tenure with CPS as a supervisor in the Office of Technology Services/Student Information Systems, providing training and support to the schools concerning student systems. After a long and varied career of 42 years, Gloria retired from CPS.

In the midst of Gloria’s public school career, Rev. Jackson and Rev. Esther Mitchell, co-founders of J.W. James Memorial AME Church, asked her to help with the music at the church in 1976 until they could find a permanent musician. After a few years, Gloria asked if they were making any progress in looking for a choir director. Both smiled as they responded, “We stopped looking after the Lord sent us you!” The Sanctuary Choir at J.W. James prospered under the direction of Gloria. While she was the director, the choir was well known throughout the Fourth Episcopal District. After serving more than 30 years as the Minister of Music, Gloria retired from J.W. James. She returned to the Congregational Church of Park Manor UCC where she had maintained her membership while serving at J.W. James.

Although she is no longer with us, many people carry Gloria’s memory and spirit forward. She will be remembered as a positive force in this life, beloved teacher, loyal friend, and a willing servant of God. Left to cherish memories of her warm smile and generous spirit are her husband of 52 years, William A. Johnson; son, James A. Johnson; daughter, Kimberly P. Johnson; brother, Ramsey E. Lewis Jr. (Jan); and a host of nieces, nephews, cousins, godchildren, and innumerable friends.