To share your memory on the wall of Dorothy Myers, sign in using one of the following options:


She was the first in her family to complete high school. She went on to complete a bachelors and two masters degrees in higher education. While she was going to school, she worked as a nail technician in her mother's beauty salon. She enjoyed watching her mother build her business and would later apply the lessons she learned in entrepreneurship after her retirement.


Upon graduation, she worked as a high school teacher in the Chicago Public Schools. She later went on to teach adult education in Chicago universities. Her passion was empowering women to support themselves and their families. As an adult educator, she taught Secretarial Science and when the use of computers grew more popular, she learned how to use them so that she could teach this skill as well.


In addition to her passion for teaching, she had a strong passion for music. From singing to playing the piano to writing and acting in musical plays that she produced for senior citizen facilities throughout Chicago, she shared her passion for music everywhere she went. She was an inspiration to many, including her granddaughter whose musical interest she always encouraged and celebrated.


She unfortunately developed dementia, which hampered her ability to continue to pursue her passions. Nevertheless, she was still able to watch her great-granddaughters grow which she enjoyed very much. She will be missed.
Read Less

To send flowers to the family or plant a tree in memory of Dorothy Myers, please visit our Heartfelt Sympathies Store.

Receive notifications about information and event scheduling for Dorothy

We encourage you to share your most beloved memories of Dorothy here, so that the family and other loved ones can always see it. You can upload cherished photographs, or share your favorite stories, and can even comment on those shared by others.

Love from the Jolaoso Family ( Nigeria, US, UK, & , Michael and Allyson Jackson, and other have sent flowers to the family of Dorothy Myers.
Show you care by sending flowers

Posted Jan 19, 2021 at 10:25pm
Gigi, I am so sorry for the loss of your Mom, (Ms. Dorothy). Although we know to be absent from the body is to be present with the Lord, the grief is still real. Know that your Mom's wisdom, integrity and love lives in YOU! You wear it well everyday. Continue to honor hear in your life. Ms. Dorothy was a special lady and I was blessed to have met her. I'm praying for you, Randy, Kris, the girls, Nate and all of those who loved her. Love you much, Debbie Jordan
Comment Share
Share via:
L

Love from the Jolaoso Family ( Nigeria, US, UK, &

Love from the Jolaoso Family ( Nigeria, US, UK, & purchased flowers for the family of Dorothy Myers. Send Flowers

Posted Jan 18, 2021 at 10:11am
We, the Women of Sigma Gamma Rho Sorority, Inc., Delta Sigma Chapter, send our deepest heartfelt love and prayers to our Soror, Gigi Parker, and her family. As your sisters, we pray that God will send you comfort and support during this time of loss. We pray that God's peace and love will keep your heart and spirit strong and that His ever presence will be a blessing. We know that your loss is deep and your sorrow is great, but know that we share in your sorrow and recognize that this loss is Heaven's gain.

"The LORD is my strength and my shield; my heart trusts in him, and he helps me." Psalm 28:7

Posted Jan 17, 2021 at 10:03am
Please accept our most heartfelt sympathies for your loss. Our thoughts are with you and your family during this difficult time.

Posted Jan 15, 2021 at 07:22pm
Gigi, I am so sorry to hear, that your beloved Mother has gained her wings. You were indeed blessed to have her for as long as you did. Randy, my Brother, if I can be of service to you please let me know.
Jack and Marissa
Comment Share
Share via: 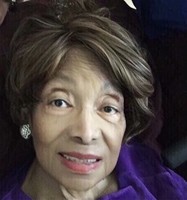